Your faithful servant, Mr. G, is here to fulfill your information needs in this wonderful, first installment to his mailing list. So, what’s been happening?

Star Wars, People! Star Wars!
Here’s the scene: We are in Phuket. We have just gone halfway across town, past the bars and massage parlours (no one told me Patong was like this), where we find ourselves at the mall on December 18th. I see that Star Wars is playing, but we were waiting until we got to Bangkok, so we could see it at a good theater. I say to my family, “Do you want to see it?” They reply, “Why not?” 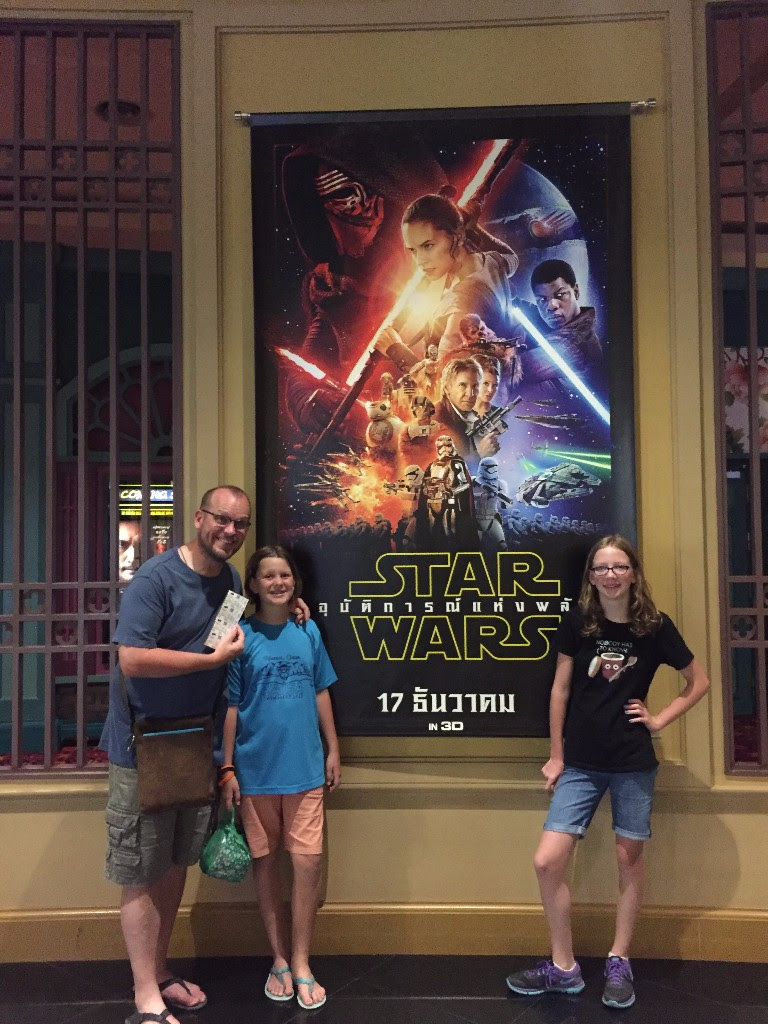 Well, the first time, I saw it, it was a bit “meh”. Don’t get me wrong. I thought it was an enjoyable time at the movies and a good flick as a whole. But when we walked out, I didn’t feel like it was great. I wanted it to be great, and it didn’t feel that way to me. I enjoyed all the characters, loved that they had a female lead in the movie, and was impressed with the story points and visual effects. But it was missing something.

Naturally, I had to see it twice.

The next time we saw it, we were in Bangkok at the Siam Paragon. We saw it in IMAX, which was how the movie should have been presented in the first place. However, the filmgoing experience wasn’t as good as it should have been, mainly because of the seats. I am a tall guy and the seats in this theater leaned back, which meant that any time the person in front of me would move, their seat would cram into my knees. It didn’t hurt; it was just startling each time, like someone hitting your knees to test your reflexes at random times during an immensely loud movie. Plus, there was the notion that every time I moved my legs, it would force that person’s seat forward. I know that this was jarring, because the person behind me kept doing it to me.

Thus, I spent half of the movie being incredibly still, trying not to move so as not to disturb the people in front of me (there were two people, one seat foreach knee). After a little while, I just gave up and said, “Forget it! I’m just going to disturb these morons and go on about my business…” which I did. Things were better after that (though not for the people in front of me).

The key to seeing the movie a second time, however, was the notion that I was able to absorb a bit more of the story. All of those moments that rang false for me the first time were a bit better the second time. I understood the film more when I saw it again and that made me like it even more. For instance, I understood this moment better the second time I saw the film, even though I totally missed it the first time…

I didn’t even remember seeing that moment in the movie, but it was an important, and integral part of Finn’s character. That’s what happens when you see films the first time; you miss important aspects of the plot.

So, I saw Star Wars and all is well in the world. Now, I am not sure what to look forward to in the coming year. Captain America will be good, but what about after that? Not sure. Maybe I can look forward to the next Star Wars installment in two years. That’s an awfully long time.

But why should look forward to that? Well, children, I have a theory.

SPOILER ALERT! If you haven’t seen The Force Awakens, then you should stop reading now. Ready?

Okay, here you go…My theory on who the big bad is (even though they would never do such a thing).

Who caused all the problems in Episode 7?
Who sent Kylo to train with Luke?
Who sent Han to his doom?
Who was looking for Luke and why were they looking for him?
Who has the power of the force but has never used it?
All jedis have a dark and a light side within them. Anakin had the dark and light side. Then he had twins…one light, one dark.
Who is the main villain in Star Wars? Leia.
Leia caused the destruction of Alderaan. Leia killed Jabba. Leia wanted her dark son to go to the dark side, where he would kill Luke. And Leia is searching out Luke so that she can kill him, once and for all.
How cool would it be to see Leia put on all of that dark make-up and fight her brother. Even better, Imagine Luke vs. Leia and Kylo vs. Rey (because we should all know Rey is Luke’s daughter…right? right?).

Oh, if only I could write the next movie. It would be phenomenal.

That’s all I have to say, people. Write me with your opinion asap.

Author, Teacher, Illustrator, Village Idiot. Randall P. Girdner is the publisher of books of all shapes and sizes, including the Boyd McCloyd series, TJHS 1987, and the soon to be published YA series, The Wizard. You can read all kinds of interesting information about him here:
@amazon.com
Or you can tweets him!
@randallpgirdner