Well, it’s been a while since I sent anything out, so here’s the latest from Mr. G! See that picture up above? That is a picture of the greatest donut shop in the history of the world, and it has been my go-to place for donuts ever since I was a little kid. They only open when they want to and they have a very limited amount of donuts, but as a whole, it really is the best donut shop in the history of the world. Did I repeat myself?

The place is called Morgan’s Bakery and as you can see from the picture, it has been in business since 1948. Everything is good, but I particularly like the chocolate twists, which are phenomenal, and something I would assume are dipped in crack and MSG before being served to the customers. I went in that day wanting one donut and ended up eating three. OH, THE SHAME!

It is currently a rainy afternoon in Canada and I am sitting on the floor of the living room at my father-in-law’s house. We have already been to Oklahoma for the summer and will be venturing to Montreal on the 1st of July to live a bit of the French lifestyle. It should be oh-so-fun.

While I was at my mother’s house in Oklahoma, I did what I’d been meaning to do for a while, which was to go through that old box of “stuff” at the bottom of the bathroom closet, which houses all kinds of Randall P. Girdner memorabilia that I’m sure will be worth massive amounts of money someday. Some of the first things I found were my report cards from my senior year. So embarrassing. For all my constant harassment of you yahoos and your cases of senioritis, you should all know that, when I was 18 years old, I had a grand case of it, too. 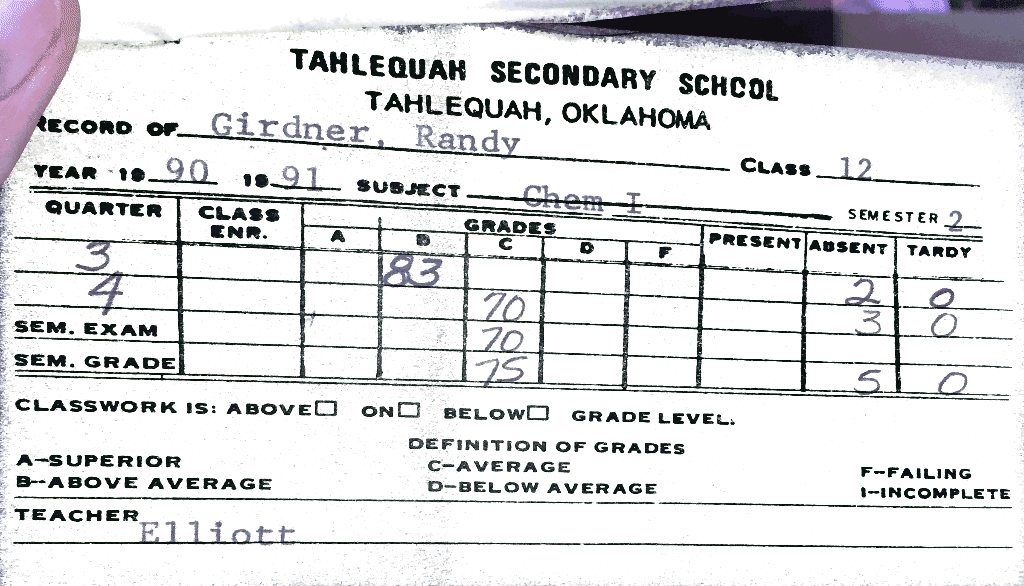 Yes, that was my grade in chemistry. I never got a “C” until my senior year. Pretty shameful as a whole. In the 4th quarter, I was doing okay, but after that, I must have been a bit off. My chemistry teacher’s name was Ms. Elliott, and though I’m sure she was a fine teacher, I don’t think she liked me much. (That’s a dirty little secret that us teachers have…sometimes, we just don’t like you…and by “you”, I’m not talking about YOU…I’m talking about the others that are not like “you”. Or maybe I didn’t like you…Who knows?). Anyway, that was pretty bad. Have a look at this: 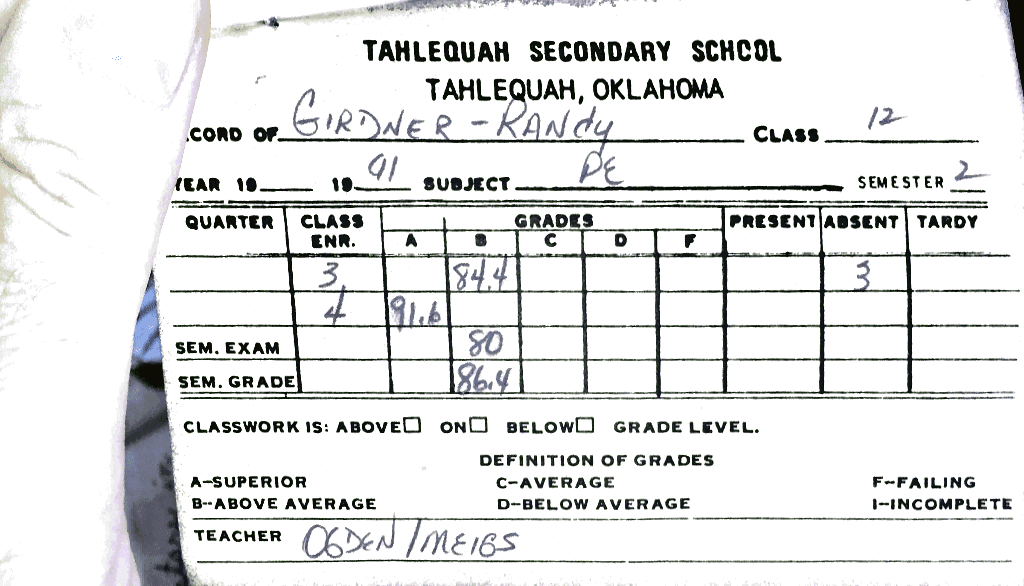 Here’s my grade for PE my senior year. You may wonder why I had to take PE my senior year. Well, it was because I didn’t have enough PE credits after quitting football, so I had to have it. Notice that, during the 4th quarter, I had zero absences. That was not technically true. I managed to convince the college intern that I would go get him food if he let me drive his car to go get it. I ended up going to get food for him almost every day and very rarely attended class. Ah, could the Oklahoma education system be better than that? 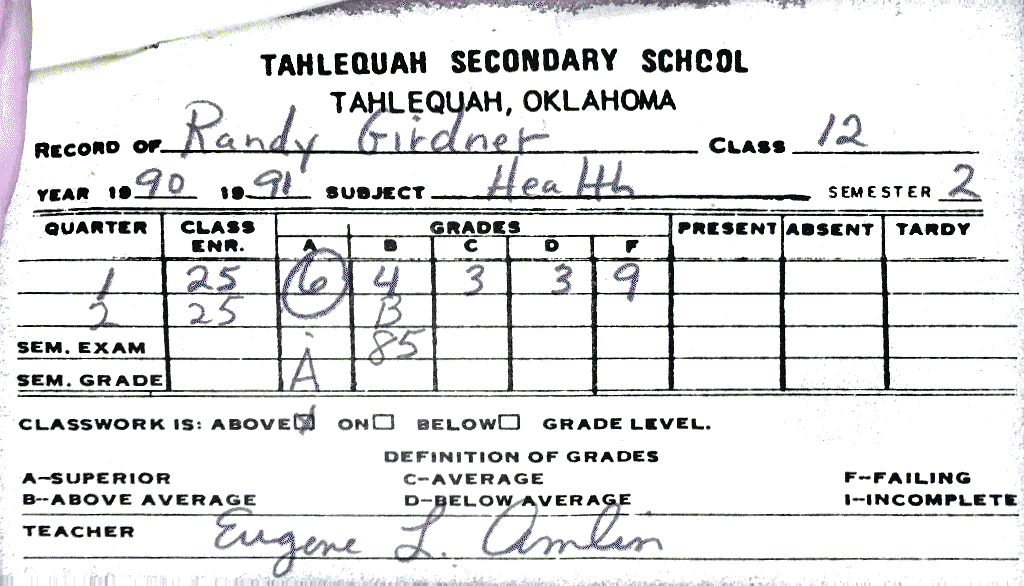 Did I ever tell you that story about the Health teacher that let me skip class as long as I did well on the final exam? I may have embellished that a little bit, because I thought that I got an “A” on that final exam. It turns out that I only got an “85”, but that’s pretty good for a guy who never went to class, right? And notice my grade! 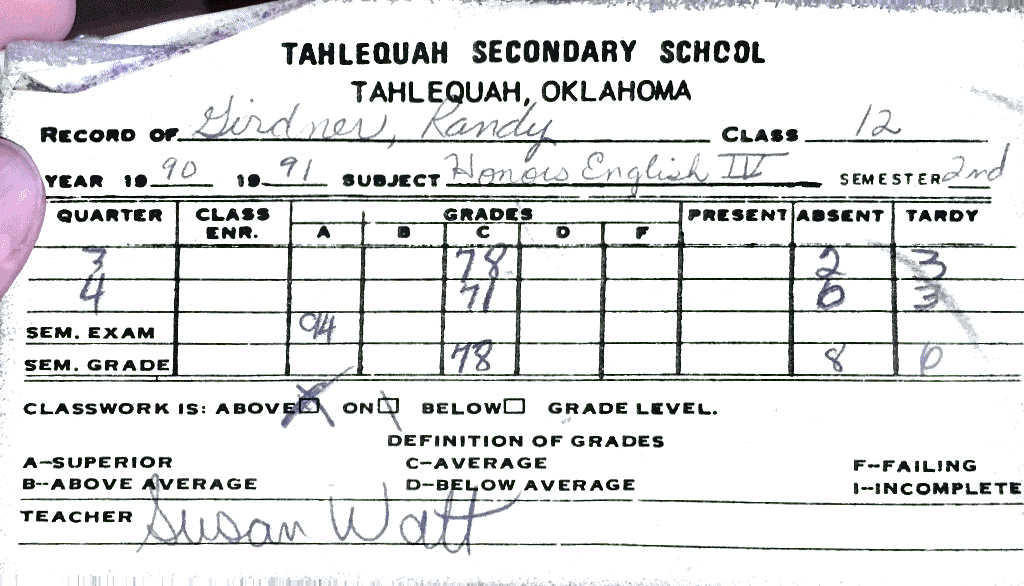 I had “Honors English” my senior year as well. That was for the smart kids. As you might be able to surmise, my grades did not reflect my intelligence. I had eight absences over the course of the semester. That was the maximum you were allowed without failing the course. AND I had six tardies. It was the FIRST CLASS OF THE DAY! What do you expect? Either way, look at that semester exam grade, baby! Still, this was somewhat shameful. I really went downhill my senior year. The good news is that, at the same time, I was taking classes at my university and got all “As”. Pretty good.

Even more shameful than all of this, I found my PSAT grades as well. Check this out… 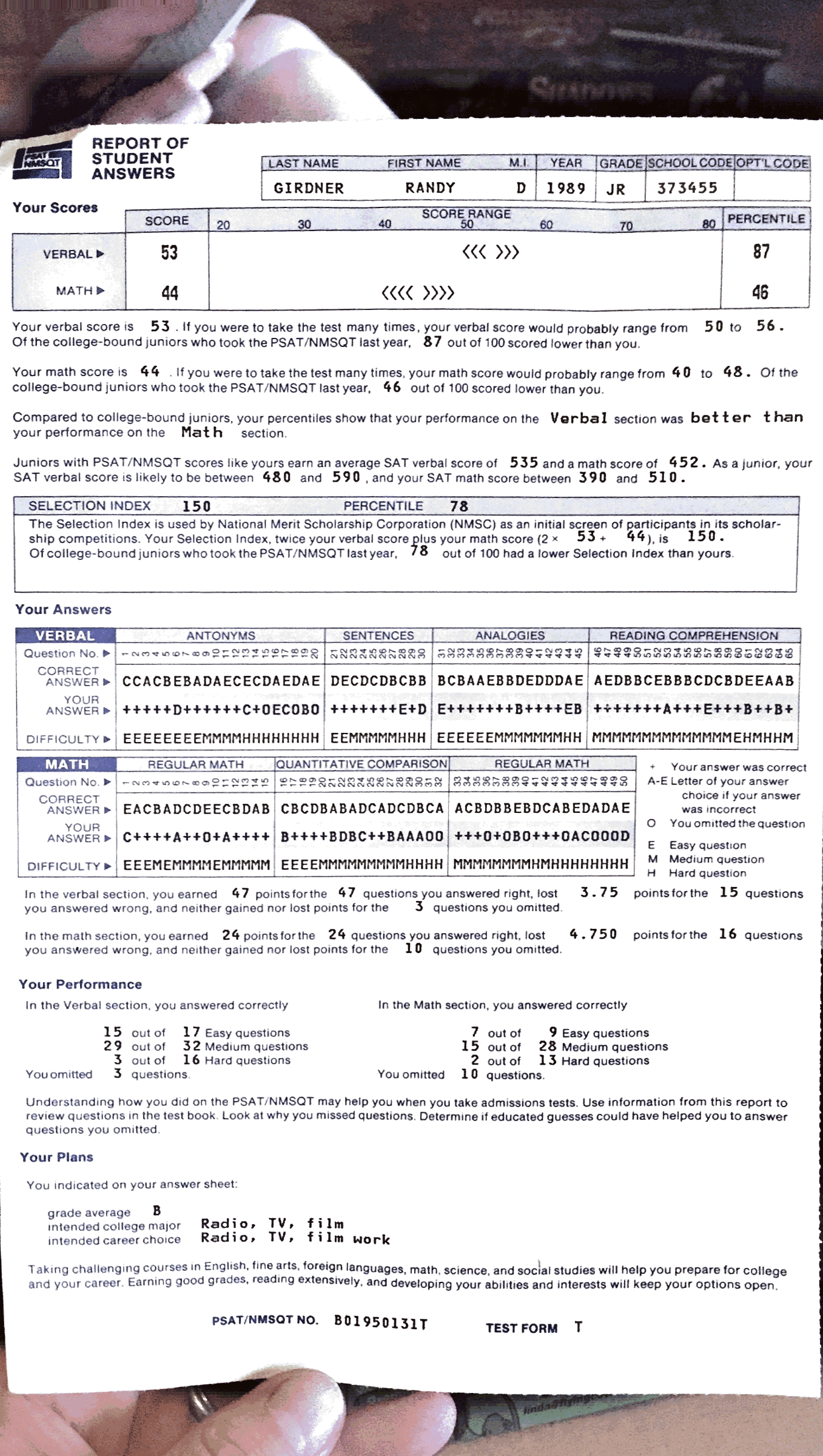 Oof! That’s embarrassing. 87 out of 100 on the verbal portion and 46 (!) on the math. I knew I was bad at math, but really, I wasn’t THAT bad. I might not have really been “on the ball” that day. That’s why I don’t like tests. The funny part is that I still probably had a much higher score than most of my Tahlequah classmates. Yeesh!

I found some other fun stuff in there, too. Like this: 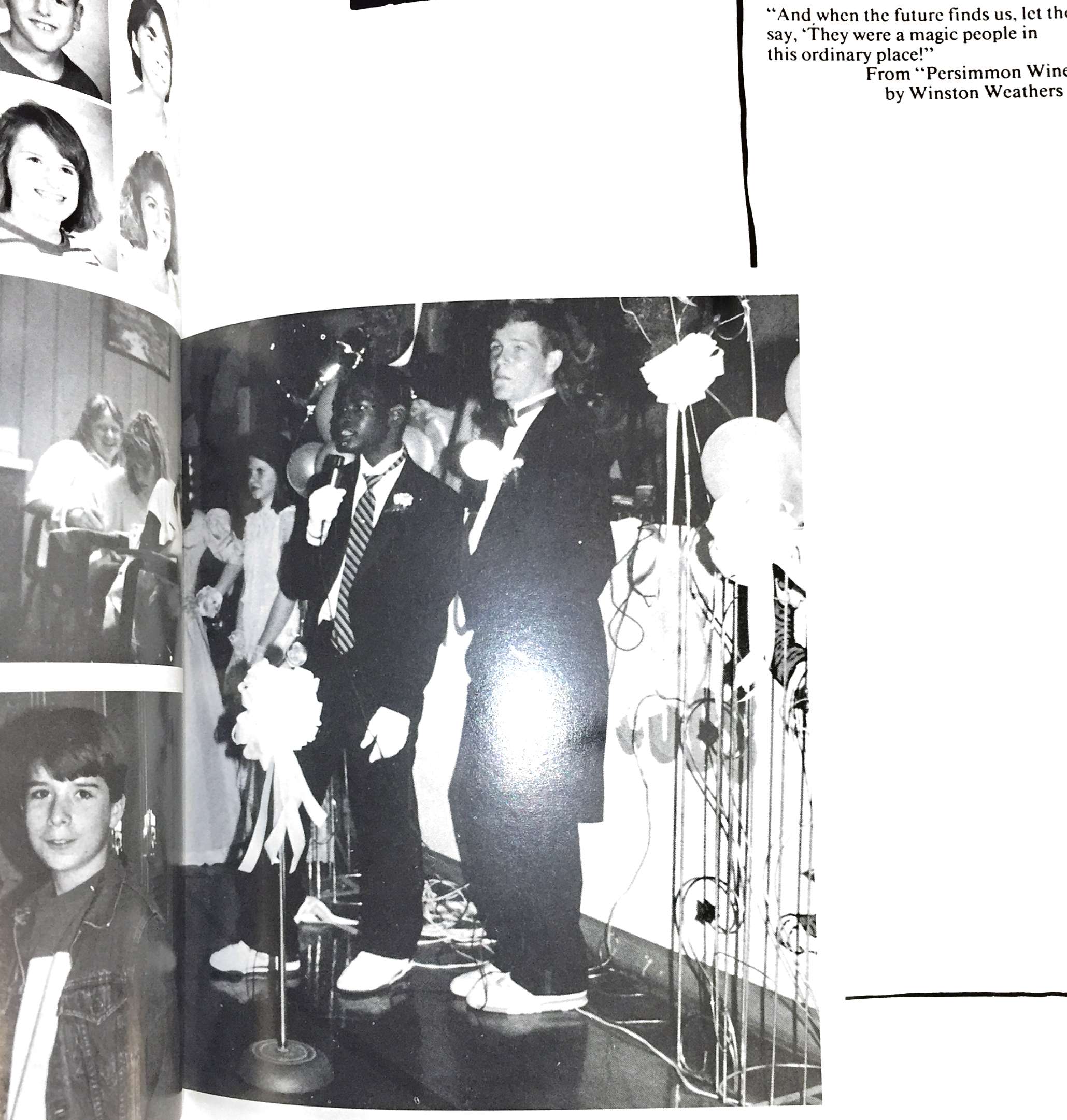 That’s me on the right in 9th grade at our big “coronation” dance. My friend, Roschan, and I were stylin’ in our tuxes and running shoes. Good times. Or how about this: 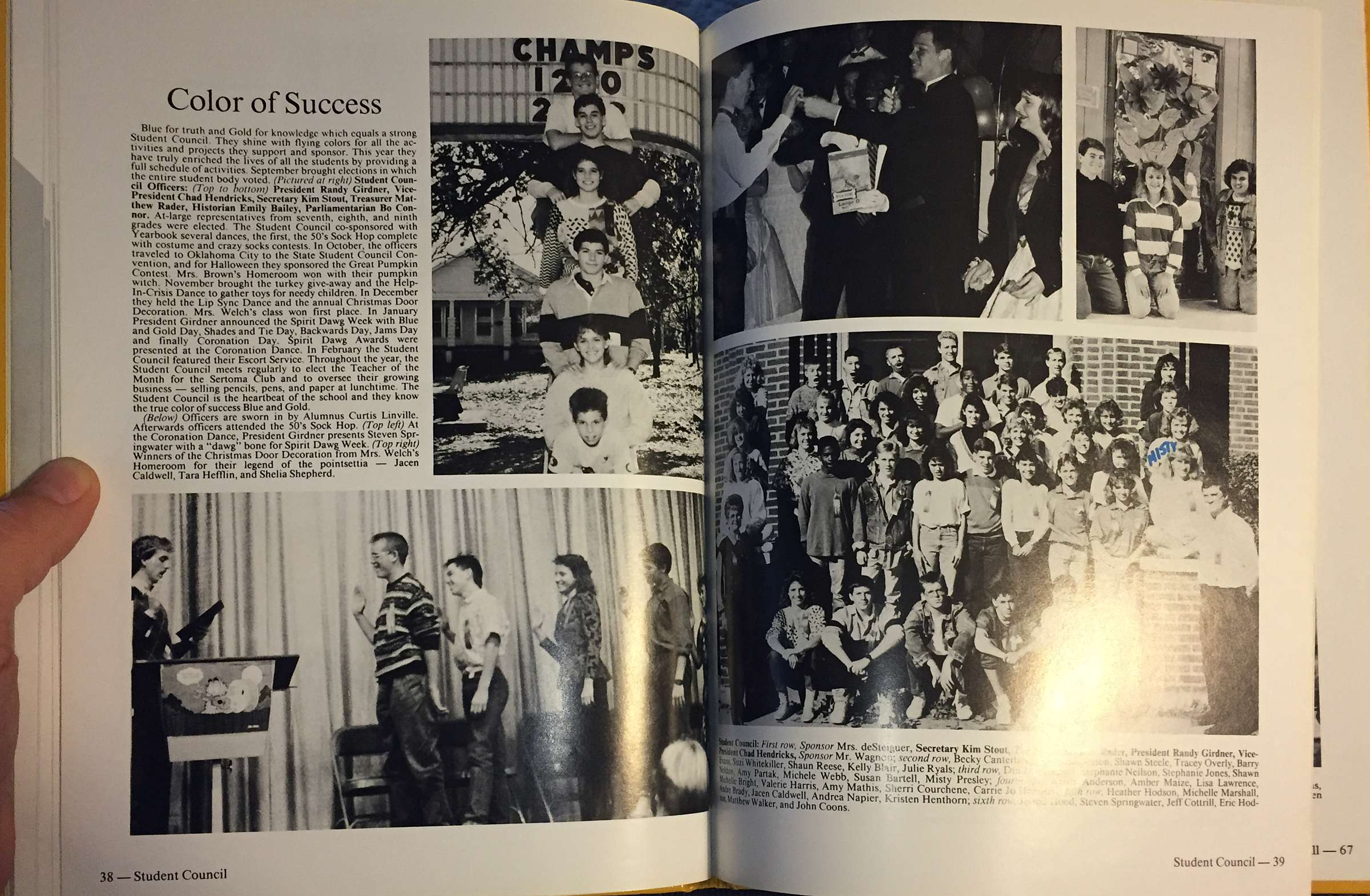 Here’s the Student Council page from my 9th grade yearbook. I was president. One might find me in several of the pictures on this page. I was so cool.

Okay, that’s all I’ve got for now.

Here’s a few updates on what I’m doing:

1. Still writing my “The Fictional and Unsanctioned Travel Guide to Walt Disney World”. I’m almost done with The Magic Kingdom and will start on EPCOT next. This is taking WAY too long to do.
2. Currently reading: Spider-Verse (a collection of Spider-Man comics from the last year) and “Flash Boys” by Michael Lewis, an account of how corrupt the stock market actually is.
3. Movies I’ve seen: WHIPLASH was the best film of last year. Hated Jurassic World. Cried almost through the whole of Inside/Out, which is the best movie of 2015, so far. I’m such a wimp. Mad Max was “Meh Max”. Not so great. I also enjoyed “The Kingsmen”.
4. TV? Silicon Valley is my current favorite show, followed by Veep.
5. Music? U2, U2, U2! Seeing them on the 6th in Toronto and then on the 18th and 19th in NYC. Here’s a video. They pulled a guy up from the audience to play with them. It’s quite funny…

Write me a letter to let me know what you’re up to, kiddos. And for those of you who wrote me in May and I haven’t written back, I WILL WRITE YOU BACK. I got very busy as school was letting out and didn’t have time to write proper mail.

Author, Teacher, Illustrator, Village Idiot. Randall P. Girdner is the publisher of books of all shapes and sizes, including the Boyd McCloyd series, TJHS 1987, and the soon to be published YA series, The Wizard. You can read all kinds of interesting information about him here:
@amazon.com
Or you can tweets him!
@randallpgirdner